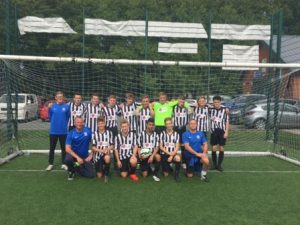 From the premier league to grassroots, electronics giant LG has sponsored some of the biggest names in football such as Fulham and German giants Leverkusen. Now thanks to Glenfield Group, LG Air Conditioning is sponsoring a local youth football team in Leicester.

The Allexton and New Parks Under 16s side is part of 27 community football teams ranging from under 5s to seniors that operate in the Glenfield Road area of Leicester and plays at New College.  The group is currently supporting over 350 members. Darren Webb, owner of Glenfield Group, introduced one of his biggest suppliers LG Air Conditioning to the community football team after hearing they needed a shirt sponsor.

Darren Cooper, Manager of the Allexton and New Parks Under 16s was delighted at the introduction “This means so much to us. We are a community team that works in some of the toughest areas in Leicester and football is a great way to engage with young people. When Darren introduced us to LG Air Conditioning and they confirmed a sponsorship deal for the 2016/17 and 2017/18 seasons, we were thrilled.”

LG Air Conditioning is now the shirt sponsor for the team as seen in the accompanying picture. Darren Webb said “It was great to be able to put a local team in touch with LG. I know they do work around the community so it is great to see them support Allexton and New Parks, and help them continue their good work for another year.”